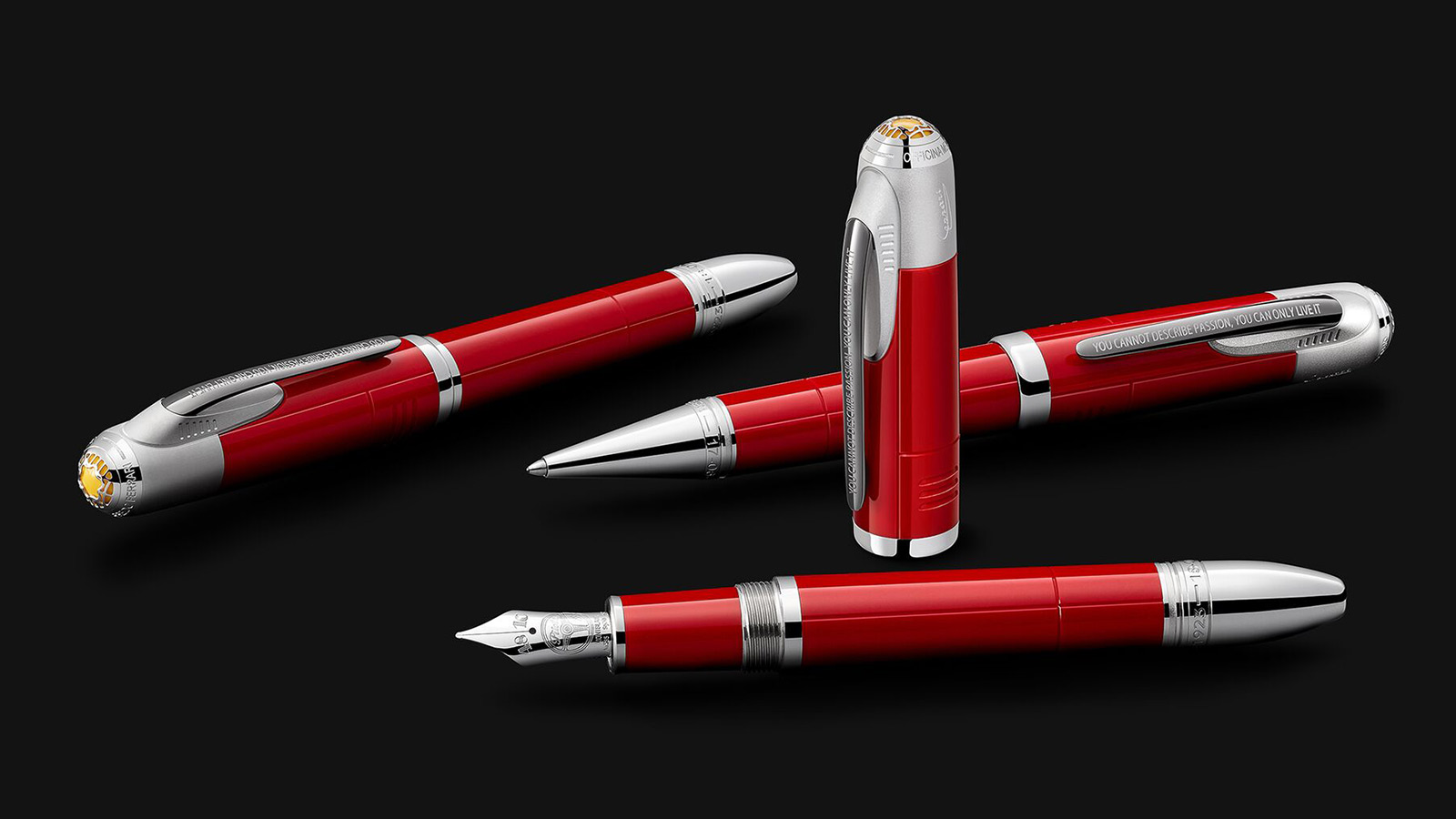 Montblanc is known for its fine writing instruments, as well as a wide variety of luxury accessories. One of the brand’s dedicated line of pens is its ‘Great Characters Series’, which debuted in 2009. From the Beatles and Walt Disney to John F. Kennedy, Montblanc has created one-of-a-kind tribute pieces to these notable individuals and many others, celebrating their contributions to society as a whole. Now, Montblanc has released an ideal gift for pen, as well as race car enthusiasts – the Great Characters Enzo Ferrari Edition. Paying tribute to Ferrari’s eminent founder, Enzo Ferrari, Montblanc this week introduced three specialized writing instruments to its Great Characters Series.

The two storied brands collaborated on the project to tell the fascinating story of this celebrated racing champion, engineer, and entrepreneur, who ultimately led his namesake company to worldwide fame. The Great Characters Enzo Ferrari Special Edition, Limited Edition 1898, and Limited Edition 98 writing instruments are designed using authentic Ferrari colors paired with Montblanc’s exacting craftsmanship. Each limited-edition piece included in the Montblanc x Ferrari release is tied to iconic chassis like the 125 S, 250 GTO, and 500 F2.

Made from red precious resin, the Great Characters Enzo Ferrari Special Edition represents the beginning of Ferrari´s passion for motor racing. The color of the resin cap and barrel of each pen in the release — fountain, rollerball, and ballpoint — is inspired by the famous Ferrari color “Rosso 70 Anni.” Two dates are engraved on the cone: one the birthdate of Enzo Ferrari and the other his first victory on a racetrack in 1923. “You cannot describe passion, you can only live it” is laser-engraved on the metal ruthenium-coated clip and the top ring on the cap features additional “OFFICINA MECCANICA ALFREDO FERRARI” engraving referencing Ferrari’s father and his birthplace.

The Great Characters Enzo Ferrari Limited Edition 1898 includes 1,898 pens produced — both fountain and rollerball — in honor of Ferrari’s birth year. Made from metal and designed to appear like the structure of a “Ferrari 125 S” engine, this pen celebrates the exacting construction skills of the Ferrari workshops. The cap top is crowned with a Montblanc emblem in a resin resembling frosted glass and embedded in a metal grid. Ferrari’s famous emblem of the Prancing Horse is depicted on the back of the cap. The metal clip is also adorned with the famous quote by Enzo: “You cannot describe passion, you can only live it.” Two dates are engraved on the cone referencing the production date of Enzo’s first car at Ferrari’s Maranello factory and the date of the first racing victory for a Ferrari branded car. The ring on the cap top is embossed with the address of the Ferrari factory in Maranello, where Ferrari’s dream became reality.

Finally, the Great Characters Enzo Ferrari Limited Edition 98 is limited to only 98 pieces. This pen pays tribute to Cavallino Rampante, the classic Prancing Horse which was originally featured on Ferrari’s emblem 98 years ago. Mimicking the bodywork of the 1952 Ferrari 500 F2, the winner of the first F1 Championship for Scuderia, each pen is airbrush lacquered by hand in “Rosso Corsa”, the official racing color of Ferrari. On each side of the cap, one finds four “air vents” that are inspired by those on the side of the bodywork of the 1952 Ferrari 500 F2. The barrel evokes that same engine, with a ruthenium-coated 18-karat gold depiction. Quite fittingly, the pen’s cap is engraved with the quote: “Sono uno che ha sognato di essere Enzo Ferrari” (‘I am one who dreamt to be Enzo Ferrari’).

For more about Montblanc, check out ‘Montblanc: Inspire Writing’