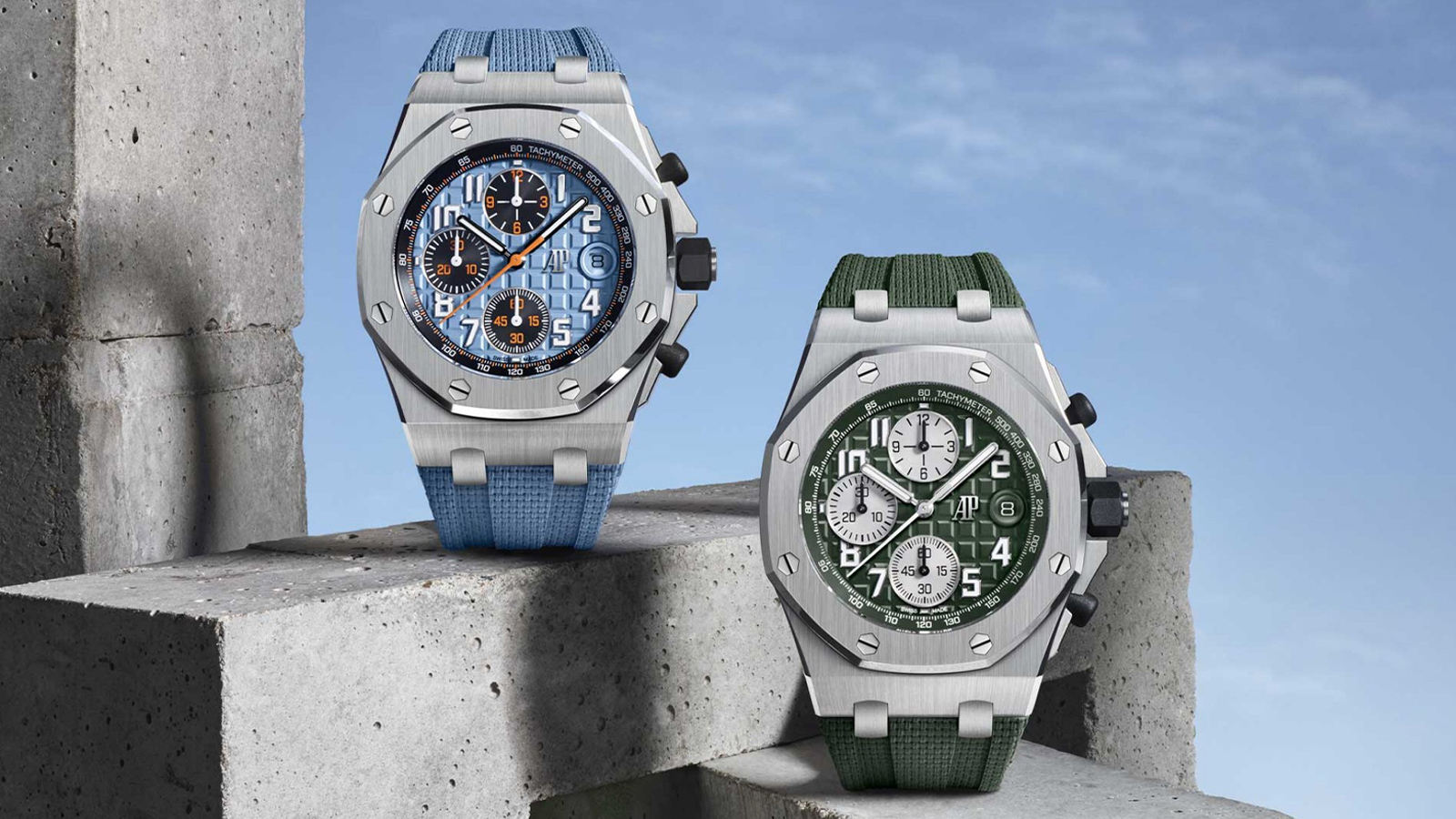 Audemars Piguet has released a new generation of Royal Oaks with the debut of five new 42mm Royal Oak Offshore models — three in the Petite Tapisserie small waffle dial design and two in the Méga Tapisserie large design — as well as five new 43mm references. This new launch of the Audemars Piguet Royal Oak Offshore Collection represents the first redesign of the Royal Oak Offshore since the evolution of the 44mm collection in the early 2000s. The five new Royal Oak Offshore Chronographs in the smaller 42mm case have the new self-winding integrated flyback chronograph Calibre 4404 movement which is essentially identical to the Calibre 4401 seen in the 43mm models. The only difference between the two is that the 4401 has a horizontal (3,6,9) chronograph sub-dial layout while the 4404 has a vertical (6,9,12) sub-dial layout which requires an extra plate in the movement. An integrated column-wheel flyback chronograph with vertical clutch, the 4404 operates at 28,800 vph and has a 70-hour power reserve.

Of these five new Audemars Piguet 42mm pieces, two are on a textured rubber strap that matches the light blue or khaki dial, and the remaining three come on a bracelet matching the steel, titanium, or pink-gold case. The two models that come on a strap both have the Méga Tapisserie dial, with the blue-dial version offered in a titanium case and the khaki-green version coming in a steel case. The remaining three have the more intricate Petite Tapisserie dial. The titanium model has a grey dial and the solid pink-gold model has the same “night blue” dial as the steel version. All five of these Royal Oak Offshore Selfwinding Chronographs measure 15.2mm-thick with 100m of water resistance.

Set with titanium, stainless steel, or 18-karat pink gold, five color variations of the 43mm also come with waffle-patterned Méga Tapisserie dials, offering a large-format take on Audemars Piguet’s beloved design, in black, grey, blue, and a smoked light brown. Beneath its dynamic exterior is the watchmaker’s latest integrated flyback chronograph, the self-winding caliber 4401, made in-house and equipped with a vertical clutch system, 70 hours of power reserve, and a patented resetting mechanism that ensures each counter seamlessly tracks back to zero. Audemars Piguet aficionados will also notice a minor facelift on the dial, with the chronograph counters rearranged for better legibility and a change to the logo, with the brand’s initials applied at 12 o’clock, replacing the longform name.