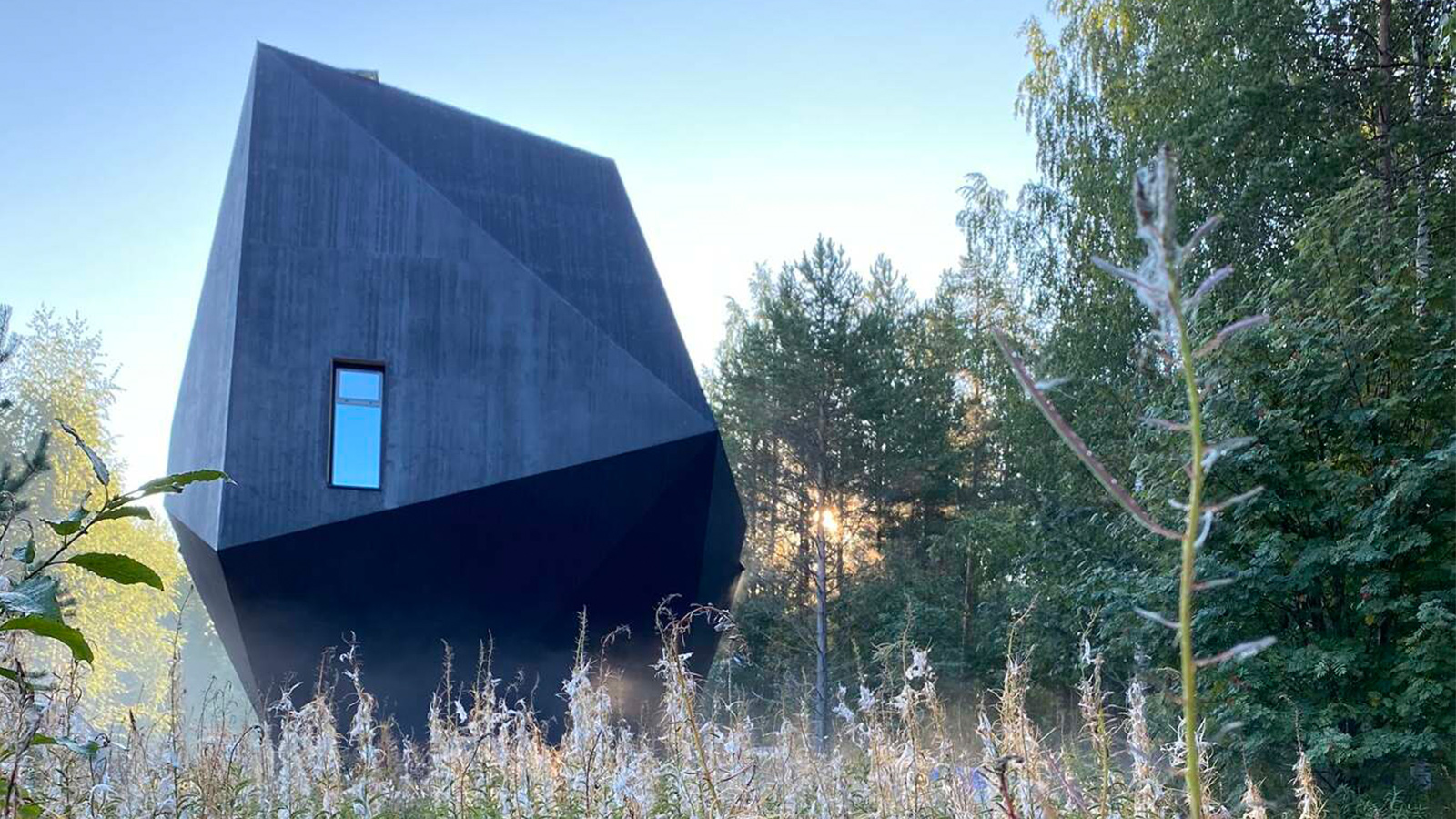 There must be something in the water in Finland. After all, this relatively small country has produced some of the world’s most brilliant architects in Alvar Aalto, Eero Saarinen, Aino Aalto, and Erik Bryggman, to name just a few — and they just keep on coming. Following in the footsteps of their architectural predecessors are Helsinki-based Kivi and Tuuli Sotamaa, the brother-and-sister team behind Ateljé Sotamaa, the firm that designed The Meteorite. Inspired by the Ice Age rock formations found throughout the rural region of Kontiolahti, The Meteorite is a stunning, polyhedron-shaped residence located in the beautiful Finnish countryside surrounded by birch and spruce trees. Originally built as a second residence for a couple and their two children, the family decided to make it both their main residence and workplace throughout the pandemic.

The Meteorite is made entirely of 272 prefabricated panels of cross-laminated timber (CLT). Air gaps of various sizes behind the facade keep the interior warm without conventional insulation, even during Finland’s freezing winters, and give The Meteorite its out-of-this-world shape. The Meteorite’s black-tinted exterior provides a stark contrast to the warm, all-wood interior. “Everything on the outside is designed to dramatically stage the inside,” says architect Kivi Sotamaa. “It’s a mysterious object, and you don’t quite know what is going on within.” Part of the mystery lies in its surprising size—the interior spans only 807 square feet of floor space, yet its total volume is 10,594 cubic feet.

The interior of the three-story residence is clad in spruce from floor to ceiling. The roof, too, is of solid wood, oiled to resist the elements and age beautifully. No plastic has been used anywhere in the structure, adding to its eco-friendly character. Unlike traditional houses where each room has a specific predetermined purpose, The Meteorite was designed as an open-concept way to organize living space, where the structure supports more dynamic relationships of its residents and a variety of life situations. In the middle of the residence, a tall atrium with a large 107 square foot skylight provides an unobstructed view of the stars. Another unique feature of the house is a catamaran net at a height of 23 feet on which the residents can “float” to stimulate creative thinking. No doubt, the creativity and daring behind The Meteorite’s design would meet with the approval of Ateljé Sotamaa’s famed fellow architects.

If you liked this, check out Xerolithi House on the Aegean Sea.