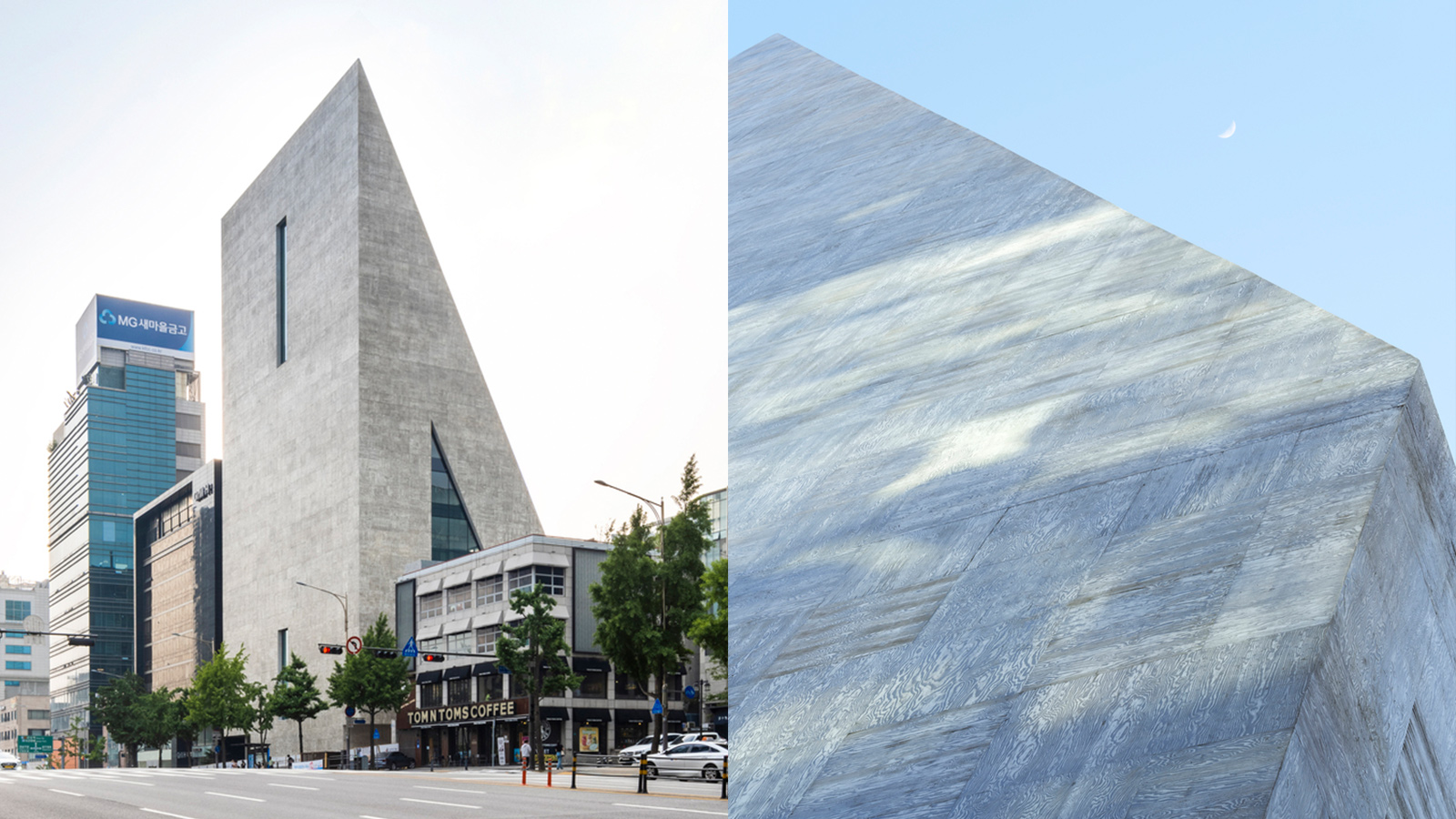 Swiss architects Herzog & de Meuron make their South Korean debut with a monolithic new office building and cultural space in Seoul that boasts a majestic triangular silhouette. The SongEun Art Space is an 11-story structure that sits along a broad avenue in Seoul’s bustling Cheongdam Dong, one of the most commercial areas of the capital city. Surrounded by an array of high-end fashion boutiques and flagships, including Louis Vuitton (designed by Frank Gehry), Dolce & Gabbana (Jean Nouvel), and Dior (Christian de Portzamparc), the SongEun Art Space houses the corporate headquarters of ST International, a Korean energy and mining conglomerate, and the SongEun Art & Cultural Foundation, which operates a nonprofit art space.

This newly-opened dramatic structure, which rises from the street like a sheer cliff reaching 197-feet, is set to become a contemporary architectural landmark amid the Korean capital’s architecture and dense urban fabric. The building’s south-facing front façade presents a continuous plane of concrete interrupted by two long, slender windows that puncture the otherwise uniform surface. These precise incisions, the larger of which is more than 42-feet tall, accentuate the verticality of the structure while hinting at the spaces contained within. Both corners at the bottom of the façade are cut away to create lateral recesses that serve as points of entry for pedestrians and vehicles. As visitors pass beneath the suspended mass of the building’s cantilevered upper floors towards the main entrance, they emerge into an airy courtyard ringed by a walled garden that separates this backyard-like space from the neighboring plots. It is here that the glass-covered rear façade begins its angular ascent, receding from view as it climbs towards the sharply pointed apex.

Spearheaded by the SongEun Art and Cultural Foundation, this building is dedicated to promoting contemporary art through significant exhibitions and various related programs. This free-standing building houses the non-commercial exhibition spaces on the second, third, and fourth levels, with a cafe/restaurant on the ground level and atrium, with a multi-functional event hall on the second level. The foundation has been supporting young up-and-coming Korean artists since its inception in 1989 through the SongEun ArtCube and the annual SongEun ArtAward.