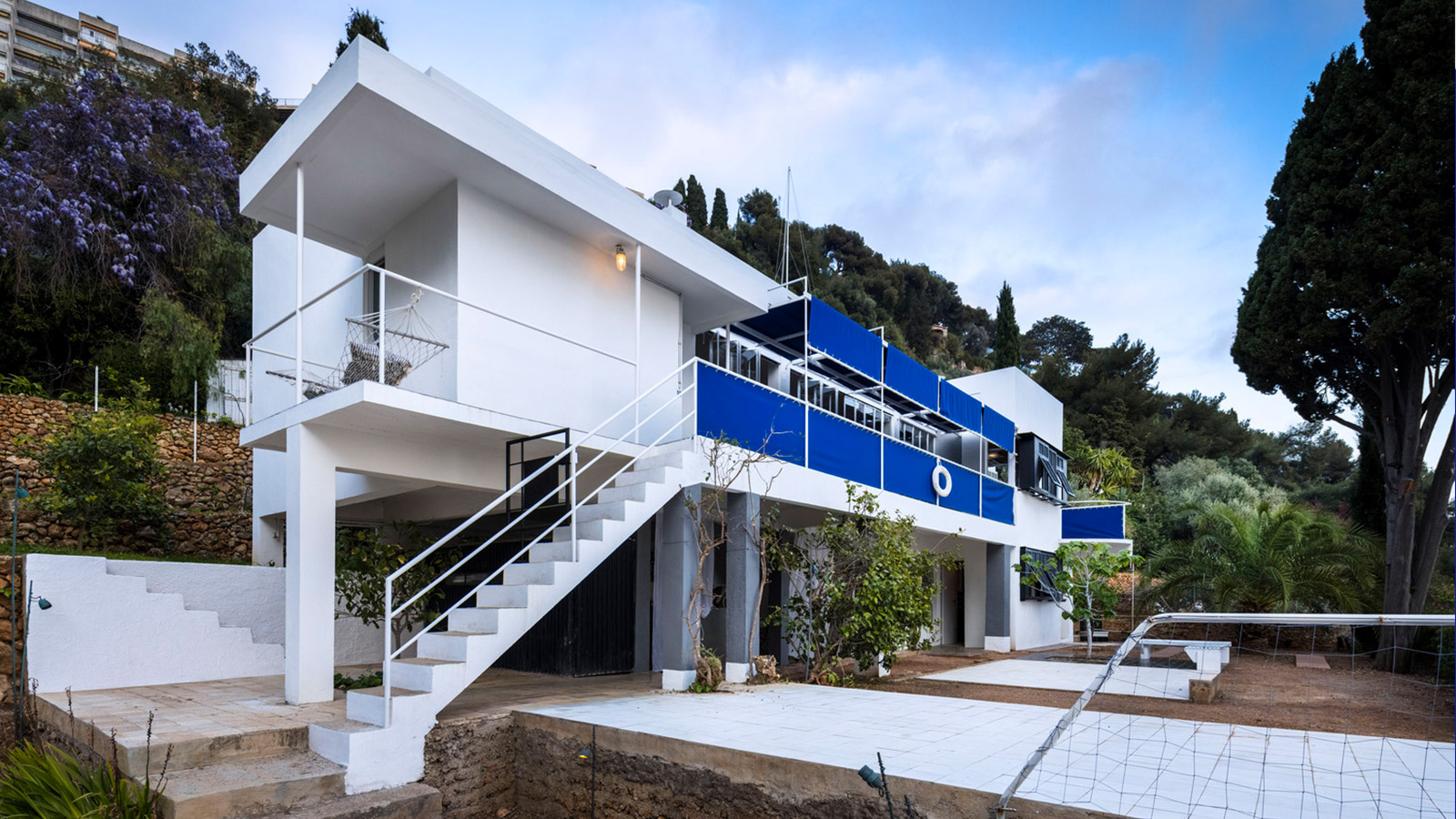 Following a five-year restoration project conducted by the Association Cap Moderne, Irish architect and furniture designer, Eileen Gray’s Villa E-1027 modernist house in the south of France has reopened. Considered a veritable icon, Villa E-1027, located in the village of Roquebrune-Cap-Martin overlooking Monaco, is now open to the public to tour. In 1926, Gray bought a plot of land overlooking the Mediterranean Sea where she set out to build a romantic seaside villa for herself and partner Jean Badovici. Gray spent the following three years designing furniture and working on the plans for her Villa E-1027 along with Badovici. When Gray’s two-story Villa was completed in 1929, it was likened to an “Art Deco yacht moored upon a craggy ledge.” Gray incorporated many nautical elements into the building’s design, including the band of horizontal windows, the mast-like flagpole, the balconies with white rails and blue-canvas awnings, and the softening curves that kept the white-plaster exterior from appearing too harsh and angular.

After Gray and Badovici split up in 1932, Badovici, a French citizen, retained ownership of Villa E-1027. Gray never returned to the house, but her friend and famed architect and designer, Le Corbusier did—including in 1938 and 1939, when he painted a series of large, colorful murals on the walls that Gray had deliberately left white, much to her dismay. During the German occupation of France, Nazi troops used E-1027 Villa for target practice, defacing the exterior walls and murals. After the war, Le Corbusier built a small rustic beach house, dubbed Le Cabanon, on the adjoining lot. The hillside cluster—now known as Cap Moderne—includes the two architects’ villas, along with some holiday cabins and a small snack bar decorated by Le Corbusier’s murals.

Following Badovici’s death in 1956, Villa E-1027 fell into shocking disrepair. In the 1980s, almost all of Gray’s original furniture was secretly auctioned off by a friend of the subsequent owner. Visitors who stopped by reported vagrants living in the house and most of the fixtures damaged or looted. In 1999, the French and local governments bought E-1027 with the intention to eventually restore it to its former glory.

A major part of the restoration included extensively reinforcing and repairing the concrete structure, which had been damaged by the sea air. Along with repairing the building’s structure, the home’s built-in and freestanding furnishings were recreated by replicating Gray’s original materials and methods. The living room was restored with sea-inspired furnishings including a large nautical map and a low-slung Transat chair that Gray designed based on the deck seating on transatlantic cruise ships. Deep-blue accents mark the rugs, daybed, and room dividers. Representing a veritable icon of modernist architecture, Villa E-1027 is a testament to the thought and attention that Eileen Gray put into every detail of the design.