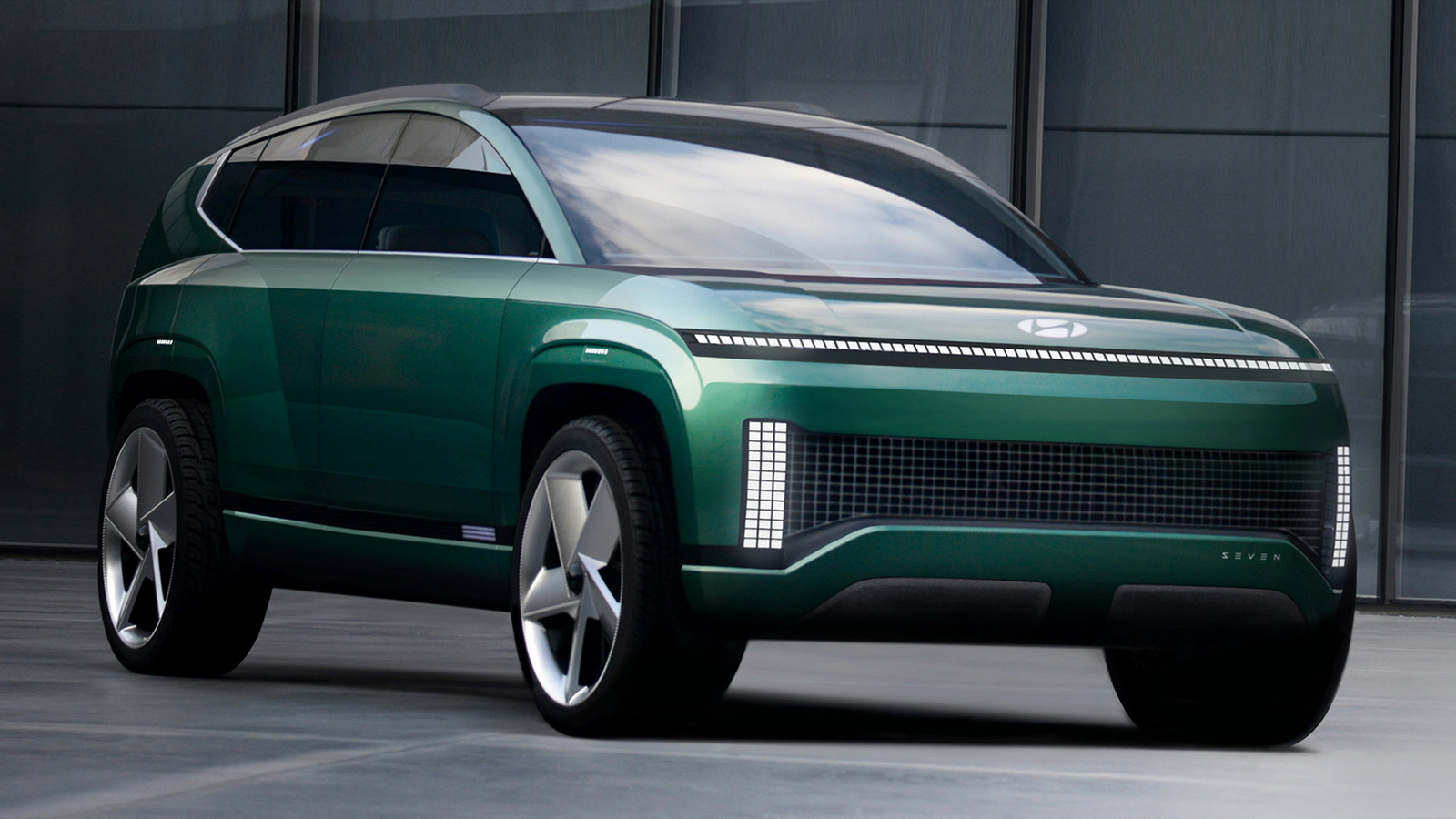 At the LA Auto Show, Hyundai unveiled its SEVEN Concept vehicle. This mid-sized electric SUV is a preview of what the production model will mostly look like when Hyundai puts it into production in 2024 under its Ioniq sub-brand. The SEVEN Concept’s dimensions are about the same as the Hyundai Palisade. In addition, electric SUVs are also earning a new term – SUEV (Sports Utility Electric Vehicle). The exterior styling on the SEVEN Concept catches glimpses of the Genesis GV80 in certain angles – mainly the rear quarters. Its rear hatch is transparent like a bakery shop window with pillar-less suicide doors, and a Robocop helmet LED front end. Compared to the rugged Kia EV9 Concept, the SEVEN offers a more luxurious appearance. However, the true highlights of the vehicle are inside.

Hyundai extended the wheels to the vehicle’s extremities as far as possible – like an F1 car. This maximizes interior space for a “lounge-like” atmosphere. Instead of multiple row seating, the Hyundai SEVEN Concept shows a sectional couch and seats that swivel. We should mention that the Hyundai SEVEN concept has autonomous driving tech. Photos show a “Universal Island” console that can house appliances like a mini-fridge and storage space. Up top, the roof is fitted with a panoramic OLED screen that displays media content or sets the mood with ambient lighting.

The interior construction features all sorts of recycled or renewable materials. In addition to materials like bamboo, mineral plaster, and bio-resin, copper was woven throughout the cabin for its antibacterial properties. Other hygiene-focused features include an airflow system that vents air out through the roof rails, and the interior can be sanitized using ultraviolet rays once you leave the vehicle. Details on what kind of battery pack will be powering the Hyundai SEVEN Concept has not been released. However, Hyundai aims for the SEVEN to offer a range of over 300 miles and 350-kW fast charging. When the production model hits dealerships in 2024, expect the SEVEN to be a bit more toned down than the concept.

In other Hyundai news, check out the 2022 Hyundai Casper.