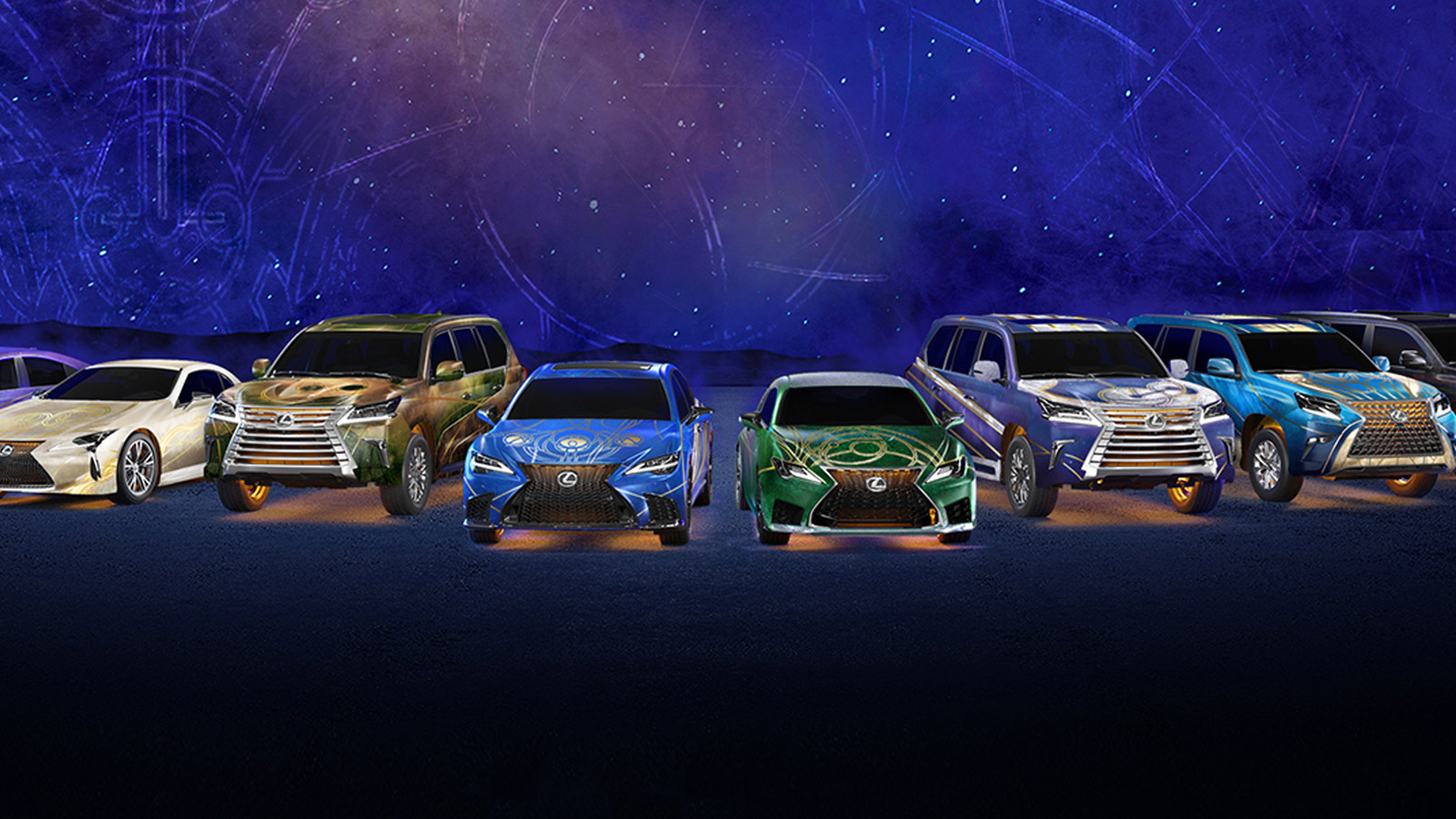 The latest Marvel Studio movie Eternals, had its red carpet premiere in Los Angeles this week. Among the cast of stars, 10 Lexus vehicles were wearing a bespoke shade of custom paint at the premiere. This fleet of Lexus Eternals’ Vehicles is the result of a collaboration between the luxury automaker and Marvel Studios. Each car features a character-theme vinyl wrap unique to each superhero in the film. The wraps on these cars are meant to represent each character’s abilities and armor design. In addition, a shared design cue featured on each Lexus is a golden glow emanating from the front grille and underbody – a reference to the film.

The cars are designated to a specific character. Here is the breakdown of each Lexus and the movie character it is meant to represent. Starting with the Lexus GX, the full-size SUV represents strength, so it’s paired with Ajak (Salma Hayek) and Druig (Barry Keoghan), two superheroes with super strength and stamina. Next, there is the Lexus LX, the most powerful and technically advanced SUV in the lineup. Hence, it makes sense that it is assigned to the most powerful Eternal character, Gilgamesh (Don Lee), and the tech guru Phastos (Brian Tyee Henry).  Ikaris (Richard Madden) is the tactical leader of the Eternals, so he’s assigned the flagship of the Lexus lineup, the LS. Comedian turned action hero Kumil Nanjiani plays Kingo and is paired with the Lexus IS model. Lexus’ versatile NX crossover is paired with Sprite (Lia McHugh), who has the ability to cast illusions. Where there is power, speed is never far behind, which is why the fastest Eternal, Makkari (Lauren Ridloff), is paired with the Lexus RC F Track Edition. In addition, the character known for her power is Sersi (Gemma Chan), matched with the naturally aspirated V8 Lexus RC F. Lastly, but certainly not least, is the Lexus LC 500. Naturally, this JDM sports car could only be paired with Thena, played by Angelina Jolie.

Marvel’s Eternals is set after the events of Avengers: End Game. The Eternals are a group of powerful ancient aliens who have been on earth for thousands of years. When a dark enemy referred to as the Deviants returns to cause trouble, the Eternals have to show the world who they are and save the world. Marvel’s Eternals is scheduled to be released on November 5th.

Speaking of Lexus, check out an upcoming model from the brand: the 2022 Lexus LX 600.