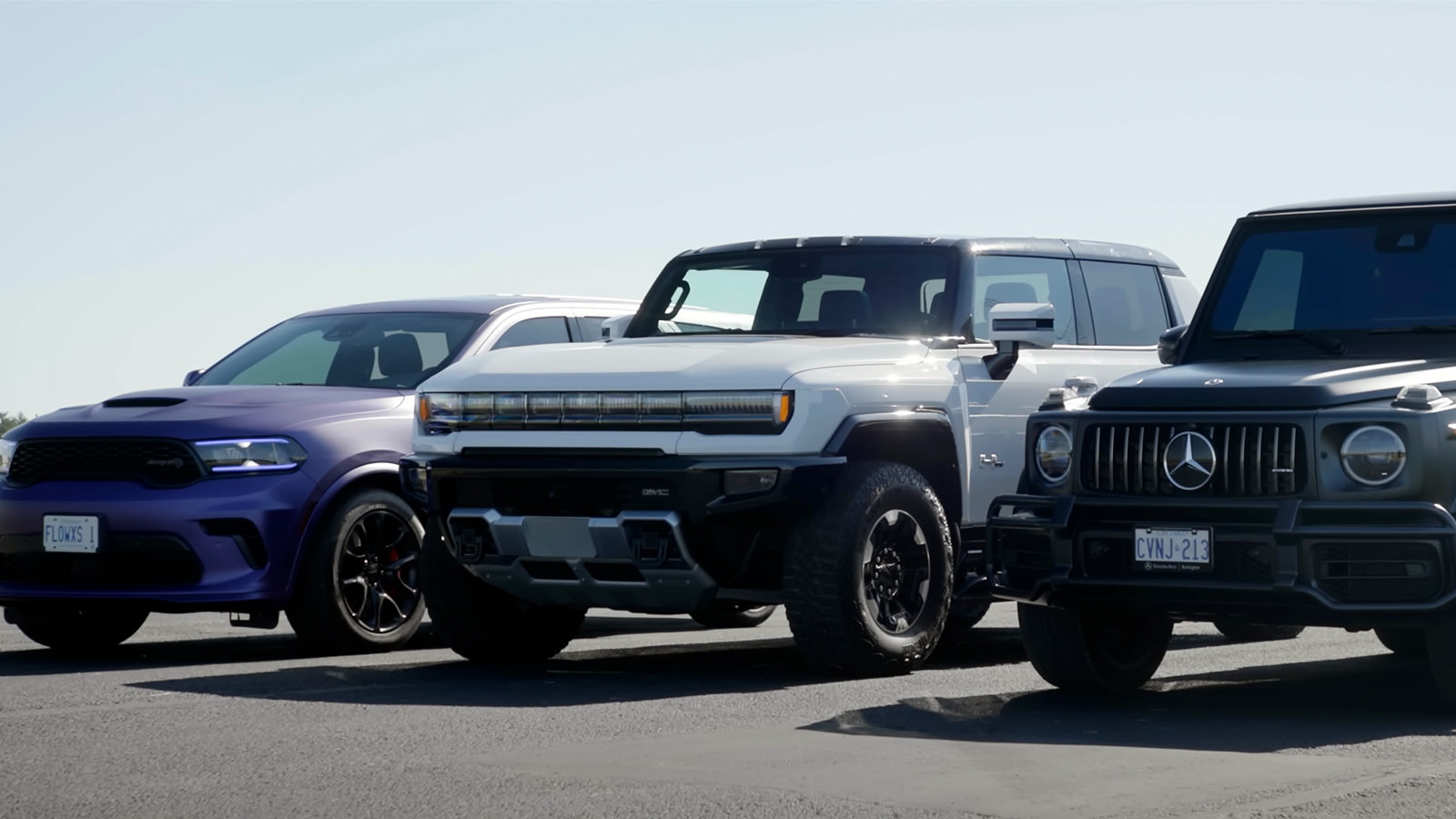 YouTube channel Throttle House’s latest video settles an argument presumably had countless times in bars and school cafeterias. Which is faster? A Dodge Durango SRT Hellcat or the new GMC Hummer EV? A clash of titans between ICE and EV for ultimate bragging rights. Throttle House hosts Thomas and James got their hands on a brand new 2022 GMC Hummer EV, a satin purple 2021 Dodge Durango SRT Hellcat, and a 2021 Mercedes-Benz AMG G63 as a benchmark comparison in the high-performance SUV segment.

The test involved launching these boulevard behemoths down a quarter-mile drag strip and a rolling start drag race. On paper, the Hummer EV’s 1,000-hp power output seems like the obvious winner, but paper specs don’t consider the laws of physics.

Watching the video, you see the Dodge Durango SRT Hellcat flex its ridiculously good launch control to leap off the line. Having experienced this sensation firsthand, I can tell you that launching a Durango SRT and hearing its supercharged Hemi scream is a Michael Bay level of saturated excitement. The Durango is the lightest at 5,710 pounds and the most affordable among the three SUVs, with a US starting price under 100K. The GMC Hummer EV  has the power and the instant torque power of its Watts to Freedom performance setting. But all that battery tech translates to a curb weight of 9,046 pounds. More importantly, its crab-walk-friendly all-terrain tires limit the Hummer EV to a top speed of 106 mph.

Off the line, the Durango charges into first place and stays there when the Hummer EV hits its top speed limiter before crossing the line. However, during the rolling start, the Hummer EV manages to pull ahead but not by much, as the Durango eventually closes the gap with its higher top speed. Meanwhile, the Mercedes-Benz AMG G63 hangs with the pack but never comes close to catching the others.

The video doesn’t lie. The GMC Hummer EV is quick but limited by its weight and tires. On the other hand, the Dodge Durango SRT Hellcat proves its freedom by being the most affordable, lightest, and fastest. So if you’re looking for a big, powerful family hauler, follow the motto – Mopar or No Car.

In other automotive news, check out the new Ferrari 296 GT3.