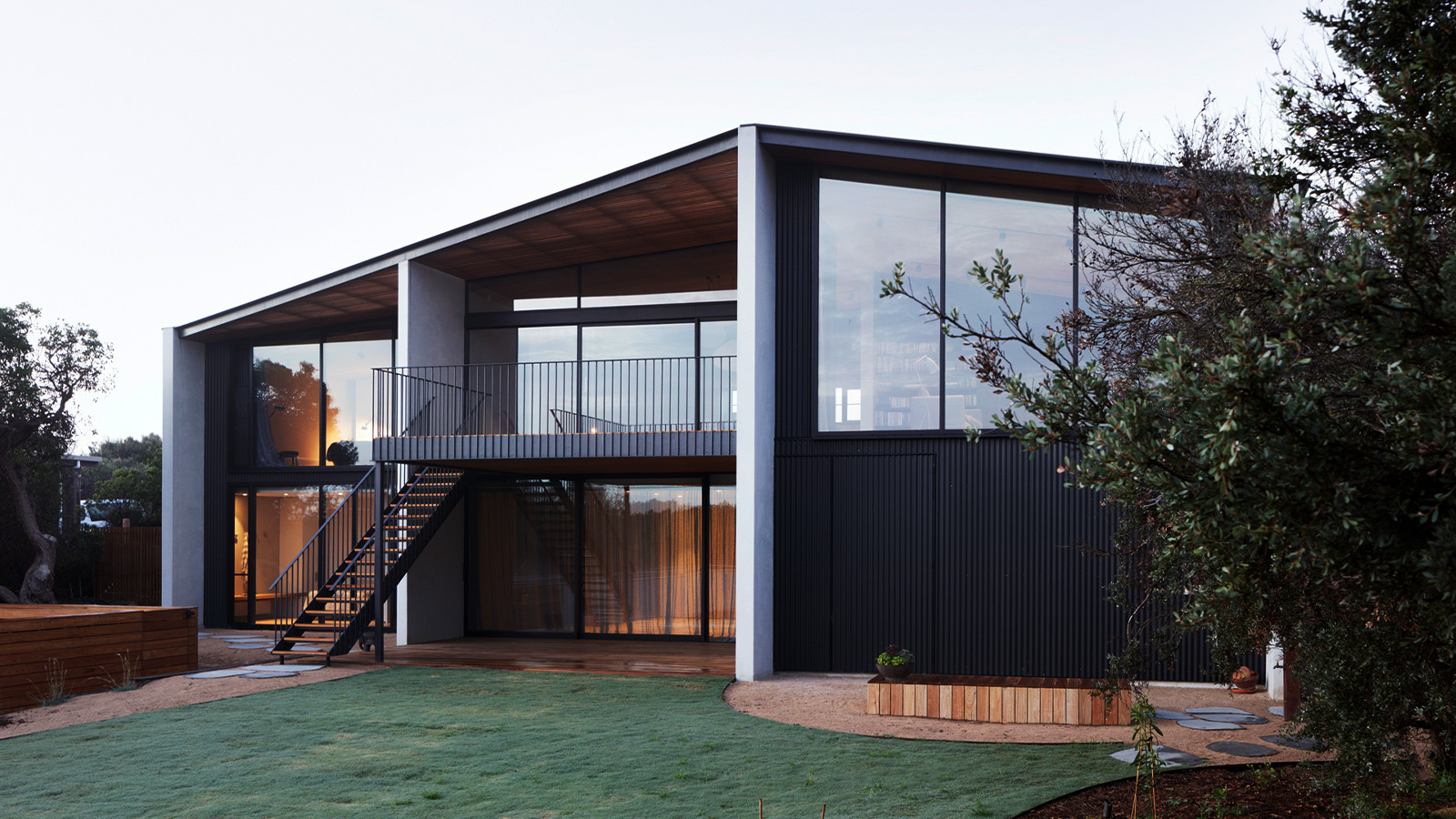 Each summer for ten years, a professional couple brought their family of five to vacation at their small, rustic cabin located in coastal Barwon Heads, Australia. As the couple approached retirement, they decided to move permanently to their land in Barwon Heads and create a home where they could age in place comfortably, enjoy nature and the water nearby, as well as welcoming their growing extended family. They turned to Lovell Burton, a Melbourne-based architecture firm, to bring their dream of Barwon Heads House to fruition.

Barwon Heads House is situated among thick native vegetation including Moonah trees, Tea Tree, Boobialla, and general dune scrub. It’s also close to a very windy beach, so the architecture had to – and does – balance connection to and protection from the outdoors. One of the biggest challenges for Lovell Burton, but also one of the practice’s most notable successes, was marrying a harsh, protective shell of an exterior to warm, soft interior architecture. The body of the two-floor, 3,200 square foot house comprises one rectilinear volume and a rhombus-shaped volume. Both structures are clad in almost-black sheets of anodized aluminum, intended to contrast with the surrounding green terrain.

Another challenge was posed with the owners’ desire to have a home that could seamlessly open, close, expand, and contract to meet the fluctuating needs of their family. With Barwon Heads House having a ground and first floors, both levels were purposely designed to run independently of one another. The couple lives on the upper floor year-round with the ground floor completely closed off until family or guests come to visit.

The interiors of the home are almost entirely lined in warm wooden beams to counteract its rather austere facade. Beams have been laid horizontally on the floors and ceiling to draw attention to the scale of the rooms, while dark-stained beams have been applied vertically to the surrounding walls to frame the sweeping landscape views seen through the huge windows. An open-plan living-area dominates the first floor which contains the kitchen, dining, and living areas. The space is fronted by a huge panel of glazing that can be slid back to give access to a large outdoor balcony. Adjacent is the master bedroom which enjoys views of water, trees, and sky. This floor has been claimed by the owners as their main living space. Whereas the ground floor, with its series of guest bedrooms and bathrooms and a playroom where the kids can play freely, enables the extended family and guests to reside relatively independent of the first floor and its inhabitants. After living in Barwon Heads House for an extended period of time, the owners are reportedly thrilled with the end result, acknowledging that their dream has been fully realized.